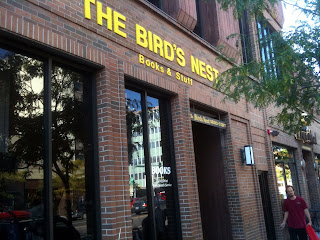 It's been a hectic month!  I'm finally home after a few weeks of meetings and conferences that took me west.  I'm a truly blessed man to be able to drive the length of Montana several times during a gorgeous, mild autumn.

While I was in Missoula, I was able to find The Bird's Nest.  It's not hard to find, but parking can be an issue.  I was parked about 2 minutes too long on the street and was greeted with a $2 ticket.  I used it as a parking permit the rest of the weekend. 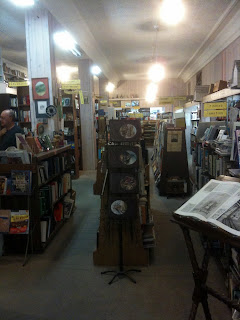 I was very happy to find this shop.  Why?  It's a true booklover's used bookshop.  When they say "Books & Stuff", it's really more about the books than the stuff, but some of the stuff was interesting too.  Ephemera anyone?  It was also nuts.  Having lived in a tiny town on a highway to Canada, I've enjoyed the quiet things in life.  But Missoula, is nuts.  The streets don't make sense, bikes everywhere, young people, buskers, Occupyers shouting, etc.  Not what I'm used to in my small town.  So, finding this quiet shop was exactly what I needed.

There were great books to be had here and prices were good too.  Very good in some cases.   I had worried that being in the center of a "happening" downtown in the arts district would make books dear.  It wasn't so.  The lady at the front desk was even great.  Completely silent the day I came in to browse (for nearly 2 hours), and helpful and pleasant when I needed help another day.  In other words, perfect. 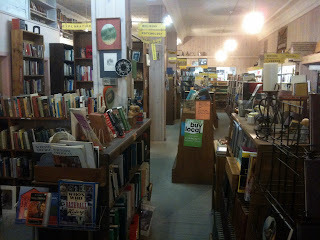 There was even some older stuff to be found on the shelves, but prices there were bad, especially as much of the 19th C. stuff was warped/ moldy/ etc., but prices didn't reflect the generally poor condition of old stuff.  And by "old", I mean 125 years old plus.  Almost everything from the last century was in nice shape and fairly, even low priced. 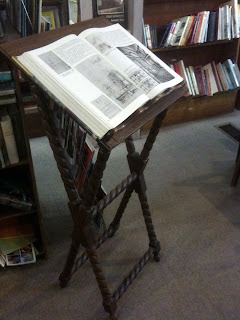 I was in town for the Montana Festival of the Book and realized I had forgotten an example of a trade edition and a book club edition to be passed around so folks get an idea of the difference.  It's one of those things best explained when holding both in your hands.  I knew the Bird's Nest would have examples, and they did, as long as I wasn't too picky (It was a Crichton title for the curious-- in both BCE and Trade hardcover).

I didn't find anything in my particular collecting areas, but I did come away with bargains-- like 4 pristine volumes of The Anchor Bible for about $15!  It may have even been $12.  It's been a couple weeks ago now, but I do remember thinking I couldn't cover Media Mail shipping for the four books for that price from separate dealers. 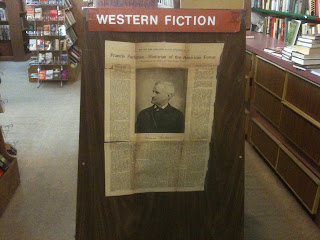 There were also nice vintage copies of classics and now-obscure-but-the-rage-in-1935 stuff too.  There were surprises, and groaners too, but it was all well chosen and the stuff that hadn't been culled in many years of shelf-sitting you could see why it was still there.  It seemed to be a well trafficked shop, which means constant turn over.  Which is nice.

The Bird's Nest is the kind of shop where they still hang a review of Francis Parkman's works from a 1926 New York Review of Books, because it's still informative.  The old building has some charm too, which I'm certainly among the least immune.  It creaked and groaned, had odd platforms and tiny nooks I had to duck and hunch to get into.  Granted, I'm a big dude, but still--.  It was also fun to play "What Dept. Store did This Fixture Come From?" 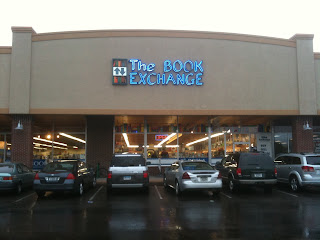 I also stopped in at another book shop, this one more akin to Half-Price Books, for those familiar with that outfit.  (I like them a lot, but have moved far from their area).  This one is called The Book Exchange.  For most used book lovers, and seekers of the rare and odd, it was a bit too clean, a little bit slick, but they had a decent coffee shop built in, which I remember desperately needing when I arrived.  For books they had very nice remainders, gently used books, etc.  Prices were really good here as well for most things.  I came away with a lot more than I had anticipated when I walked in.  I definitely bought books out of pure serendipity.  It was about what one would expect from a smaller, more local version of Half Price Books in a modestly sized college town.  One of the things I noticed was a very large selection of comics.  I don't go in for them myself, but for those who do (and I know there's a lot of you), this would likely be a stop you wouldn't regret.  They also had a great genre paperback section, which was nice since I was needing the next installment of a series, and they had the next two!  Also, lots of parking (which is honestly almost never a problem in Montana).  Sorry I didn't seem to take many pictures inside.  Probably because my hands were full of books.

So, if you're in Missoula, there are a couple fantastic book shops in town and another close by. Check them out and say hi.  Or not.   Silence is a virtue in Montana.

There's one "book store" here in Helena that I'd like to think you'd find interesting. I'll introduce you to the owner the next time you're here if you ever get this way.

If it's Mr. Van Nice's place, that's the next post in the hopper. I was in Helena last week for a museum meeting.