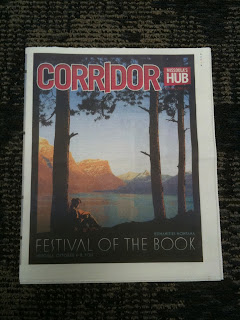 I've recovered from my latest trip to Missoula, this time for the Montana Festival of the Book.  What a wonderful event and an amazing group of people who put this on.  Upon arrival I picked up the loose paper bundle gathered for orienting presenters.  I scanned the program prepared as a supplement to the local newspaper, and lo and behold, thanks to alphabetical listing, there I am on the same page with James Lee Burke!  How about that.  Sure there are six names between his and mine (including the amazing Bonnie Jo Campbell), but there I am. 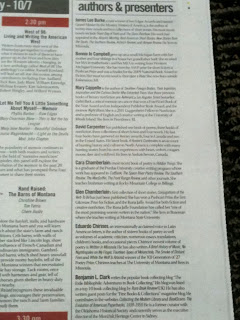 The festival itself was only a couple days long, but included enough panels and presentations I was forced to make tough choices.  There were often 6 choices at any one time, and all of them with fantastic authors and presenters.  You can see for yourself at the Festival website, while the 2011 info is still up.

One such session I enjoyed was a discussion between Keir Graff, Craig Lancaster, Jenny Shank, and David Abrams about "online stuff."  It was focused on blogging and social media but did get around to a few other topics as well.  Especially as all four have published/ soon-to-be-published novels.  Also, Craig was funny.  So was Jenny, but you expect her to be, having written for The Onion and McSweeney's.  Sorry, but it's true. 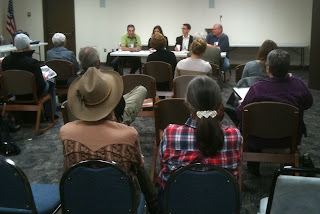 Montana's Festival of the Book is really dedicated to literature and literacy.  It's also almost entirely attended by middle-aged and older people, which was a surprise.  There seemed to be a lot of young people around for a few key sessions, especially in Poetry, but that would be it.  Odd.  I thought to myself, well, this is more the demographic for book collecting anyway, so I'll likely find other collectors here.  But I really didn't, until my session.  I found the idea of a session on book collecting or a talk about books as objects was disorienting to many participants.  And intriguing.  They checked their schedules, asking, "When are you, again?", and "I'll have to catch that." 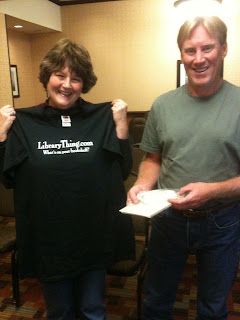 My session (titled Adventures in Book Collecting) was pretty well attended (about average for the smaller sessions).  There were tons of great questions, and people seemed genuinely interested in learning more when it was done.  Of course, my favorite part, was all the smiles at the end.  It didn't hurt LibraryThing hooked me up with some great swag to give away!  You can't tell, but the guy in the greenish shirt is holding a cue-cat.  Everyone else ran away to gloat over their prizes, so I missed photographing about half of the swag winners because I was mobbed by the audience.  I should bring an assistant next year.  Any volunteers? 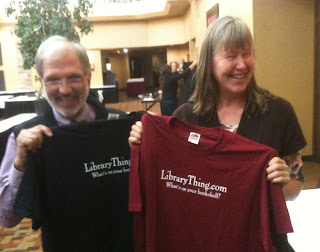 Since I was in the last time-slot of the last day, the festival was drawing to a close.  It was a lot of fun and I look forward to trying it again next year, if they'll have me.


Attending these kinds of high-quality events, one should be forgiven the temptation to name-drop, so I will only indulge it only once more.  Corduroy. 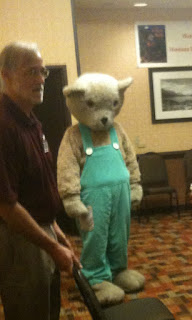 Enjoyed your post on the Festival of the Book, and also the previous post on the Alberton Book Store. I guess a person who knows what he is doing might find really good stuff in Alberton, but to me, any 100,000 books is just a stack of mostly old and no longer useful books. As much as I do enjoy cracking open a book, I also have embraced the Kindle as a tool for reading. Thanks for visiting my site and I have subscribed to The Exile Bibliophile so I can follow you in my Google Reader list. You also have a really WONDERFUL list of blogs and sites that you follow and I will be checking those out.

YOU BET! Count me in. I'd do it just for the poster! I met a number of younger people at the Western Heritage Artists show last March, including one young man who went home to download Jamie Ford's Hotel on the corner of Bitter and Sweet, after seeing my First Edition sitting on my table. He told me that he was a reader, but found that if it had to be an actual book, he'd have passed. After being told it was available as an eBook, he was headed home to get it. Kids need to be encouraged to read, even if it's on an ipad, Kindle, Nook or whatever. You and I can continue to search out the hardbound versions...

By the way - I was discussing not-so current events with a book collector/subscriber of mine the other day, and he hauled out a Margaret Bourke-White volume, and tipped into the inside of the cover is a signed letter from Margaret. I recalled the name immediately as the woman who had her photograph of Ft. Peck dam published on the cover of LIFE magazine way back when.

Just a little tidbit, but YOU came to mind when he showed me this book.