Flu, Libraries and Sammies in Oklahoma 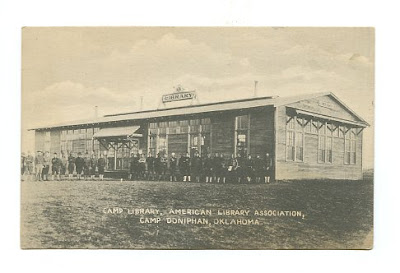 The American Library Association (ALA) sponsored camp libraries all over the US during WWI. Library directors serving at Camp Doniphan were Luther L. Dickerson and William K. Porter. If there was an existing facility, the ALA would use it. However, in many cases, including Camp Doniphan, the ALA would be required to meet their own space requirements. Luther L. Dickerson, of Grinnell College was sent to Europe after the Armistice to oversee a library there. William Porter replaced him in Oklahoma. 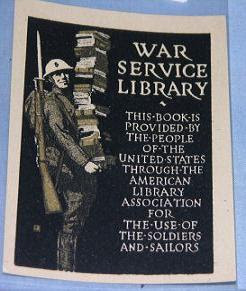 Luther Dickerson went to the American Expeditionary Force University at Beune in the Cote d'Or region. It was only operational for three months, March-June 1919, but Dickerson was able to accomplish many things. One being the number of books available to the soldier-students. One week after arriving and shelving 6000 books the library opened. Within a "very short time" the library exceeded 30,000 volumes, over 80% non-fiction. The three connected buildings that made up the library provided accommodations for 1,500 soldiers, twice the seating capacity of the central library of any American university. Daily circulation approached 1,100 volumes. In the short life of the Beune library 88,500 volumes circulated and attendance was estimated at 310,000.

Most of that information can be found in Arthur P. Young. Books for Sammies: The American Library Association and World War I. Pittsburgh, PA: Beta Phi Mu, 1981. ISBN 0910230153.


I have some interest in these libraries and those like them, like the libraries set up at camps for the Civilian Conservation Corps, POW camps, etc. The ALA processed millions of books during WWI. I'm sure they used many different markings for books, but mark them they did. My favorite to date is the bookplate which uses the art of the ALA book drives by CB Falls. I'm fortunate to have this plate in my collection. This weekend I found another label, more plain. 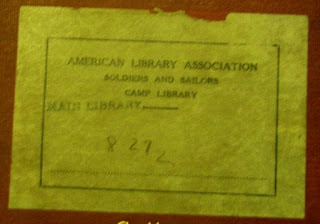 It's a simple bookplate that reads "American Library Association/ Soldiers and Sailors/ Camp Library." Most bookplate collectors define labels as strictly typographic bookplates. They sometimes have ornamental borders, but are otherwise quite simple. Some of my favorite marks of ownership are typographic labels. Finding the book at the OKC Metro FOL sale, maybe this book came from Camp Doniphan. Sadly, there is no way to be sure. This label was applied directly to the cover and has the call number written on the spine and on the label. Many camps had the ALA library and then smaller "branches" in individual barracks, or with the Red Cross, the hospital, etc. So, the "Main Library" stamp likely means this book was kept at a building like the one pictured in the postcard.

In the back of another old book I found some neato postage stamps. There were programs with the Post Office during WWI and WWII (and perhaps other wars) that books could be sent in the mail to soldiers by simply applying postage to the book itself. Pardon my finger in the photo. 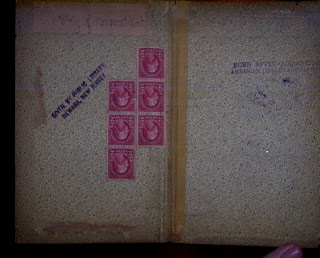 Then I noticed the rubber stamp on the paste down. I found it disturbing. 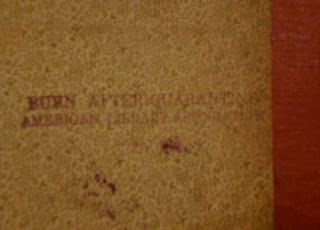 1918 SPANISH FLU EPIDEMIC flashed involuntarily through my mind. I could feel the red rot on the spine dropping molecules into my white palms. Ugh. Wide-eyed, I stiffly pivoted at the waist to find the nearest door out. After all, I had to get my treasure home.

Now, if any of you out in bibliosphere-land have or know of a really great collection this book should go to, let me know. Does anyone know of other related bookplates or markings related to these camp libraries?
No comments:

If that strike doesn't work, there is always the efforts of patrons. We do what we can.
No comments:

I've been following this story for a few weeks now, and have been disappointed to hear that this is going on. I am hoping to offer some simple support.

The argument boils down to these points: The librarians and staff of the municipal library system in British Columbia would like to be paid similar wages and salaries to other comparable positions within the government. The government agreed to this proposition *10 YEARS* ago. The public is backing the librarians. I wasn't sure what I could do, but there is a link to an email you can sign and send to the appropriate eyes. The following is an update from Classical Bookworm blog:

The library lockout has begun and the capital of British Columbia has no public libraries today and for the forseeable future. Roughly 300 staff are now out of work, and the patrons of one of the most heavily-used library systems in Canada are now without access to the library materials they have paid for. The tax-paying and voting public seems to be solidly behind the librarians, but our elected representatives are hell-bent on reneging on the 1996 promise of pay equity.

For too long the municipalities have benefited financially from the legacy of discrimination against workers in this female-dominated field. A joint union-management study into pay equity found gaps that, at today's pay rates, range from nearly $3 an hour to nearly $10 an hour between library staff and other civic workers. This is simply unacceptable, especially in a country where equal the treatment of men and women is our strongest right. (Unlike other Charter rights, it cannot be legislated away using the Section 33 "notwithstanding clause"—that tells you how important it is to Canadians.) It's quite sad that in 2008 women workers still have to fight for pay equity, especially in one of the most progressive parts of the country.

If you think librarians deserve pay equity, do take a moment to send a message to the City of Victoria (which has the most representatives on the library board). Comments from outside the area will have extra weight in our tourism-sensitive region. Our local politicians should know that they are being watched. Thank you.

Book Sale on the Horizen

To the best of my knowledge, the biggest local booksale is coming fast! I'm already excited, eyeing my calendar for time I can sneak away from work and slink out to the Oklahoma City fair grounds.
I officially dropped the ball on re-uping my membership in the Metro Library Friends group. I'll have to get down to the sale early Friday afternoon to renew and get my tickets for the Friends sale Friday evening. That is really the key to getting the first semi-public whack at the books. Friday night is when all the dealers come out. Last year was nice. People were mostly well behaved. There were a lot of pros in the ranks and several ISBN (I sell by numbers) sellers as well. Prices were good, people were nice, the event was well organized. What else could a bibliophile hope for? I love a good book sale.

Last year I tried to figure out how to attract local bibliophiles to a book collecting club. Since I knew no one then, I made up these little slips of paper 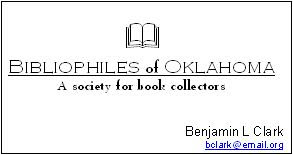 with my email on the front and a little blurb on the back and the url for the little website I threw together. I would toss these little slips on the tables, especially in the better books room of the sale. I'd also stick them inside the front cover of books I had looked at but passed on. About one quarter of all books at the sale are in the better books area, so it's huge.

Did it work? No. But, it wasn't a total loss. I did get a spike in traffic on the little website. Over the course of a few months I would take some of the slips of paper to book stores in the area and do the same.

This year I've put this one together and will try and print some up. On the back would be a short blurb and the url. I'm also using this on Flickr, posting it around hoping to drum up some interest. What do you think?
For those who want to know, the inaugural meeting of the Bibliophiles of Oklahoma will take place Thursday, March 13th 2008. Please contact me for time and place. All you need is a love of books.
No comments:

Someone at Welch & Harris Book Binding had a knack for writing ad copy. Mining old city directories for ads related to the book trades for the American Book Trade Index, I have gone cross-eyed. Twice. I'm currently chasing a Civil War bookseller/ blockade runner/ preacher. In that hunt, I've come across what is to date, my favorite ad copy. Totally unrelated to the other gents I'm tracking, but interesting.

"Authors and Publishers of the South and West, take notice, that we are ready, with our armour on, to battle,MANFULLY, for SOUTHERN RIGHTS, by Binding editions of Books, in muslin, Plain or Gilt, from 1,000 copies, upwards."

By the mid-1850s, people were talking quite a bit of Southern Rights, and using all caps when they spoke of it too.

Tossing my penny searches into the wishing well of Google, I found at ww.bartlebysbooks.com a few pages for sale, so apparently Welch and Harris did some printing as well:

[CONFEDERATE IMPRINT]. Piano Music......
Charleston, SC: Welch, Harris & Co., premium book binders, 1862. Title-page and index leaf only, printed to be used in binding a volume of sheet music. 4to. (4) pp. Title page printed in brown, red, green, and blue, and with a wide triple ornamental border; index leaf printed in blue and black. Not in Parrish & Willingham (cf. P&W 6719 for an 1861 issue of the same title page). Disbound; index leaf with 26 manuscript titles, soiled, a little edgewear, but a good example. (Book ID 50500) $250.00

Also via Google books I found Charles Newcomb Baxter. Confederate Literature: A List of Books and Newspapers, Maps, Music. Boston Athenaeum, 1917. In this digital xerox we find an Almanac for 1864 which mentions another logical sideline for Welch & Harris: book selling.

Not exactly book trade related, but I'd love to have one. I wonder what they look like? Does anyone out there have a Rauschenberger Cylinder book case?
No comments: