2011 Montana Festival of the Book 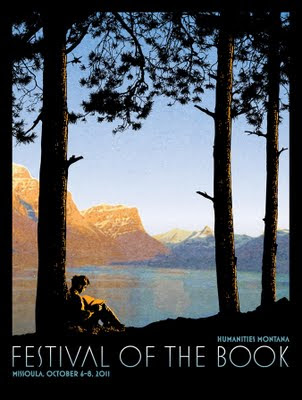 The new art is out, and they've now released the roster of presenters too!  On the list, I'm between Edwardo Chirinos and John Clayton.  They've also released a schedule of sorts-- I'm sure there will be tweaks, but it's great to see it finally.  Looks like they've settled my seminar on book collecting into a great spot on Saturday afternoon.

Overall-- I'm pretty excited.  I've not had many chances to promote book collecting in a flesh and blood setting, but I'm thrilled to get the chance.  Surely I'll wish I could have changed something by the end of it, but that's what next year is for, right?

If you're in Montana, don't miss out-- heck from my desk, almost the entire state of Idaho and most of Washington, Utah and Wyoming are closer than I am, so come on out Oct. 6-8 to Missoula, Montana, one of Montana's gem cities.  I'm sure you'll be glad you did.

I wish I lived closer. I would really like to attend. Good for you for promoting book collecting! I love the poster, by the way.

Love the poster. That really captures what reading is all about...beautiful job.

Hey Benjamin, any interest in writing a guest blogpost on the basics of book collecting for the readers of my blog? I will gladly promote it to the 2,200+ book lovers on my Facebook page and provide a permanent link to your own blog. Let me know!

FYI, I keep the posts short, just about 500 words, so it wouldn't take too long.

Send me an email at brad.wirz@gonereading.com and thanks!

Sorry I'm late to the party. I'd still love to add a post on the poster over at Letterology. Any chance you know the artist of the poster? It's lovely!