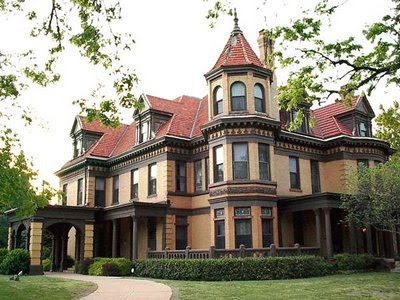 Wonderful. Amazing. Very Interesting. And they weren't talking about our digs. We actually didn't meet in the big house, but in the carriage house 'round back, which is still very nice, and actually better fitted for hosting these sort of events.

These were the words of folks who came out for the lecture by Dr. Kevin J. Hayes on the library of Patrick Henry. Dr. Hayes discussed what he had found about the patriot's library, and what his library can tell us about the personality of this enigmatic founding father. His findings will be published this fall in The Mind of a Patriot: Patrick Henry and the World of Ideas, from the University of Virginia Press. I don't want to give away the ending... 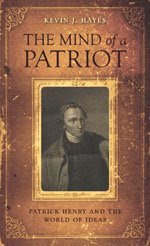 I was a little disappointed in the number of people, but we certainly did not lack enthusiasm and curiosity. Four of our regular members were there, one had an excused absence: being in another time zone half the summer. The others, unexcused. But, all told, we had double the bodies than we've had at any other meeting. And everyone was well behaved. I think everyone asked a question during Q & A, and no one threw anything or yelled obscenities. We also managed a couple of people who are interested in becoming full fledged members, which is wonderful. And FREE!

I had asked Mrs. Exile to buy some cookies for us at the store... she rolled her eyes and we wound up with homemade shortbread, pretty cupcakes and a fresh fruit spread to put a fancy downtown hotel's Sunday brunch buffet to shame. I put out cups, forgot to print the intro-bio of our speaker (managed to print it on some labels in the offices of our hosts), and almost forgot the drawing. Our winner Dr. LB (a *real* Dr. and wife of BoOK member Dr. RB) won the drawing and selected an old color catalog of maps going back to 17th century.

Putting on the event I learned a lot. We've not hosted one of these special scholarly nights before. I'm hoping to do these quarterly, with our regular casual meetings monthly. The presenter and content of our first one certainly set a high standard. I hope these will be hallmarks of our organization and our events.

One thing I learned, is that I did submit our (FREE) event to the different public radio stations in the area. That was helpful, as it was posted to their respective websites and they did play PSAs announcing our event. Well, one did for sure, as I heard it. I posted the event to other Community Calendar of Events type websites, including LibraryThing Local. However, LT only shows 50 LT users in a 25 mile radius of me. I live in Oklahoma City. Not exactly a low-population place.

I sent out multiple emails to the membership list I have. I did get one regret due to gas prices.

The most effective thing though was calling people and personally inviting them. If I got face-to-face with someone they came. Next time, we may need to set up a calling tree. Yikes. People hate those. But it works.

Also effective, folks who had read about the event right here on the blog.

I did manage to get a copy of Dr. Hayes's new book fresh off the press, The Road to Monticello, from Oxford University Press. I've only had time to dip into it over the weekend, and so far so good. The reviews have been positive, as expected. Here's a review from the Boston Globet his weekend of Road to Monticello.

So, to Dr. Hayes, a HUGE thank you for giving our night its guts. Thank you to our kind hosts at the Overholser Mansion. 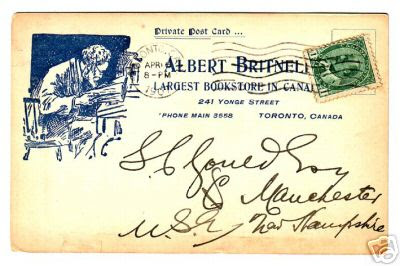 The envelope? No reason. I just like the man reading. 1907, from Albert Britnell, the Largest Bookstore in Canada.

Being the modest man that he is, I'm not sure if Kevin remembered to mention this: he's giving a talk on THE ROAD TO MONTICELLO on Friday, July 18 at the Full Circle Book Store in Oklahoma City. Tell your friends!