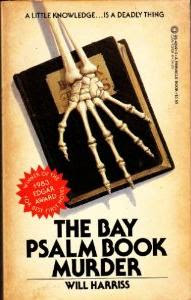 It's not often I actually address real life reading on this blog... I'm not sure why. Unlike some book collectors, I really do read! I even read the books I collect. Actually, that's how I often decide what book to find in the nicest 1st I can afford is by reading a pip. Especially in the category of Bibliomysteries.

What is a bibliomystery? I generally agree with the definition used by the Graduate School of Library and Information Science (GSLIS) at Simmons College, in Boston--- the one active institutional collection of which I'm aware. They say:

"Bibliomysteries are mysteries in which books, manuscripts, libraries of any kind, archives, publishing houses, or bookstores occupy a central role, or mysteries in which librarians, archivists, booksellers, etc. are protagonists or antagonists (and preferably the location or occupation is important to the plot or theme). Our collection does not include academic mysteries or mysteries which happen to be about journalists, authors, or literary figures unless libraries, books, manuscripts, archives, and so on, are important to the plot."

I've started a bibliomystery group over on LibraryThing, and the discussion has been interesting. Some folks do include things like Jane Austen mysteries, which has Austen as the sleuth, but otherwise no other biblio-element. I don't count those.

So, a new (to me) book has me trolling the fixed-price-venue sites: The Bay Psalm Book Murder. Harris has only written this one bibliomystery, but he won an Edgar for it in 1983. The Edgar is the top prize for mysteries of any genre, so I felt this was a pretty safe bet. Some books in this genre are stinkers, or entirely too "cozy" for me.

Bay Psalm was enjoyable, though not aging terribly well. It read like a novel written in the mid '70s, not the mid-'80s. The treatment of minority characters is a bit dated, but not implausible. Cops are not given the usual mystery novel treatment, which was refreshing. They are actually portrayed as overworked but competent professionals! The bibliofactors of the story/ plot were good, and one of the most enjoyable elements of the story, which unfortunately isn't always true in bibliomysteries. There was one technical issue with how Harriss described foxing (which was perhaps accurate for the time...), but the book does explore printing, typography, binding, paper, and of course, some of the earliest American printing in a way that doesn't bog the reader. These elements are also not blended in as filler.

If you enjoyed John Dunning's Bookman mysteries (like I generally did), this is a natural fit for you. Harris is a decent writer, the style is good but very California (which I don't love). The setting doesn't feel false; Harris knows these places. The protagonists in Dunning's books and Bay Psalm Book Murder are both named Cliff, even.

I'm a big fan of John Dunning's Cliff Janeway books, especially the early ones. A bibliomystery I really liked was THE BOOK OF AIR AND SHADOWS by Michael Gruber. It's all about a search for a 'lost' Shakespearean manuscript.
I've just discovered your blog and am liking it very much.

Bibliomysteries are one of the areas we collect. Quite possibly some of the items we have tagged in LibraryThing are not in line with the definition given. However, like the tags that identify the shelf or box where a book may be found (LT gives no alternative for this other than comments and private comments), most people look to tags as a means of making it possible for them to find books of interest without resorting to recalling the author or title.

That said, I have noticed some of the modern niche cosy mysteries from Berkley Prime Crime and others have varying levels of quality and book lore in them. None come to the level of Dunning, of course.

The Booktown series purports to be set in a used bookstore in a NH town but none of the elements of running such a shop are given. The books magically appear as if from the "Old Book Warehouse"(TM) and there is no agony over identification, condition, pricing, or sale when people complain about the pricing. Instead, busloads of tourists come in and make it difficult for the tiny staff to write the orders fast enough. No book is too scarce to be found. It does not reflect antiquarian bookselling. Indeed, the author has commented that the concept of first sale is unfair to writers since they don't get paid for books that are sold as used items.

As one who managed an antiquarian store for a dozen years (1988-2000) with a specialty in old children's books, I like to see a fair amount of "book lore" in my bibliomysteries even if it is about fictional books.

I have read through the LT forum posts but have not posted there yet. My LT collection ID is "keeline".

Hi
Would be great to have a chat with you. I am writing a story about book collecting and liked your blog very much. Wanted to ask you about how you started to collect books, how you use the internet and write about it etc.

please send an email to gmijuk@yahoo.co.uk so we can establish a contact.

Thanks so much for your help
Goran

While doing a little more searching for bibliomysteries I found this post from July on DarkRoastedBlend which shows jackets and covers for several apparent bibliomysteries (many from England) of which I was unaware.

Also, the last link on this post to LibraryThing doesn't work. It shows me my own collection so I think something is wrong with it.

I love how you listed the books! Wonderful! Thanks for stopping by my blog.